FreeRTOS is a real-time operating system for embedded systems, being ported to several microcontrollers. It is distributed under the GPL with an optional exception. The exception permits users' proprietary code to remain closed source while maintaining the kernel itself as open source, thereby facilitating the use of FreeRTOS in proprietary applications.

FreeRTOS is designed to be small and simple. The kernel itself consists of only three or four C files. To make the code readable, easy to port, and maintainable, it is written mostly in C, but there are a few assembler functions included where needed (mostly in architecture specific scheduler routines). The download contains prepared configurations and demonstrations for every port and compiler, allowing rapid application design.

Another related project is OpenRTOS, which has an identical code base to FreeRTOS but with different licensing. The OpenRTOS license removes all reference to the GPL and its implications. For example, one of the conditions of using FreeRTOS in a commercial product is that the user is made aware of the use of FreeRTOS and the source code must be provided upon request. OpenRTOS doesn't have this requirement.

SafeRTOS is a derivative version of FreeRTOS that has been analyzed, documented and tested to meet the stringent requirements of the IEC 61508 safety standard. Complete safety lifecycle documentation artifacts have been created and independently audited to verify IEC 61508 SIL 3 conformance.

Can the Industrial PC port run under Windows? The answer is yes. In FreeRTOS, there is an x86 port that can run in a dos emulation box. But you should take care that it is a simulation and won't give you the correct response. In addition, there is an ARM port that can be simulated within Keil.

Steps to Run the x86 Port Under Microsoft Windows

2. Unpack it under C Drive

3. Download the OpenWatcom tools for windows from here and install it under C drive

4. Open the Open Watcom project in the FreeRTOS/Demo/PC directory - it is called rtosdemo.wpj

5. In main.c, comment the line "vStartComTestTasks( mainCOM_TEST_PRIORITY, serCOM1, ser115200 );" or you will get errors about COM1 not available 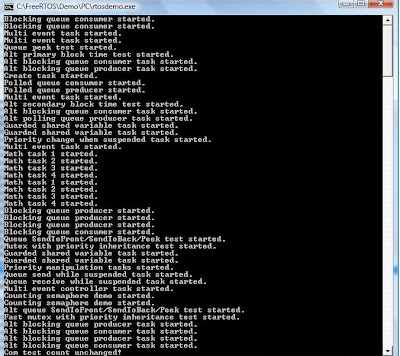 I think the next step is to make a complete free course about FreeRTOS. This tutorial will serve as a starting point to build complete labs based on windows simulation. I hope, they will be a success like the uCOS-II courses I made earlier.

Introduction to RTOS on Udemy 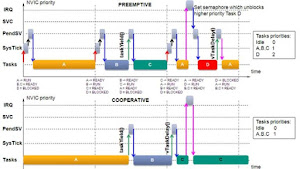 My Introduction to RTOS on Udemy

My TV Interview on Nile Culture

My Interview with EEWEB

How to be an Embedded SW Engineer?

I used to work in

Become a Fan of this Blog